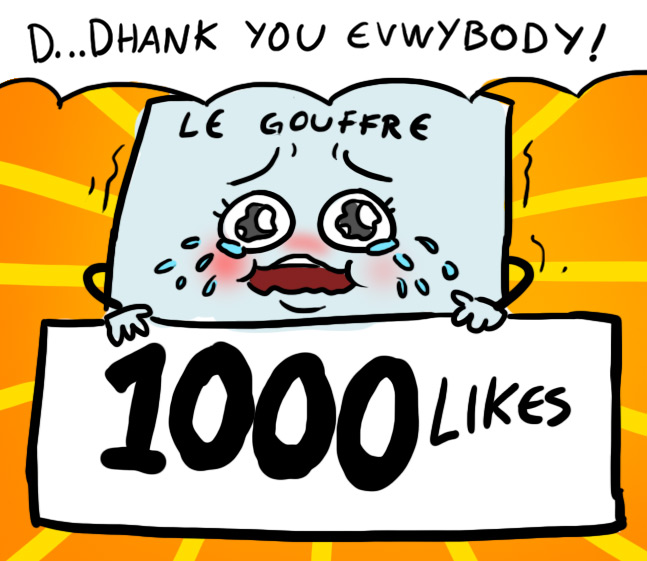 We have awesome news concerning Le Gouffre on this beautiful beginning of summer. First of all, our film received a great welcome at the Palm Springs festival and won Second Place for the Audience Award. It was also chosen to be part of the Best of Fest program, which we are very proud of!

The film was also selected in three new festivals. Don’t miss the chance to see Le Gouffre on a big screen if you’re in the area!

And finally, here’s an interview we did for a Japanese website a couple of months ago that was just put online. Since a lot of you probably can’t read Japanese, we posted our original answers in English under the link.

What did you do to “kickstart” your project when you launched your campaign? Did you experience any difficulty to promote your project?

Our film was chosen as the “Project of the Day” on Kickstarter. This gave us amazing exposure. We also presented our project on many animation forums. We think the overall vibe of our project (serious and honest, but also light-hearted and funny at times) helped get people involved, even those that didn’t know us before.

A lot of people were impressed by the “financial” side of our success and wanted to know how we did it. This interview is our most in-depth description of our experience with Kickstarter yet!

If we ever do another Kickstarter, it would probably be for a way bigger project so we would aim for a higher goal using what we learned this time. For this project, we didn’t plan a lot of “stretch goals”, so when we reached the amount of money we needed, we didn’t have much more to offer to attract new backers. This was probably the weakest part of our campaign, so it’s something we would probably improve next time around.
Hopefully our fanbase will keep on growing as people will hear from us or see our film, and that too would be a huge help for future projects.

However, investing yourself in a campaign like this is a huge gamble. For us, it was a “last resort” type of move, because we were already all-in with this project from the very beginning when we quit our jobs. We might not have taken such a huge risk if we knew right from the start that it would take two years instead of one to do this and that we would have to rely on crowdfunding, but sometimes you have to be a little crazy and risk it all if you really believe in your dreams! Our naivety ended up being a blessing.
Our biggest advice would be to try to have fun! Do a project you love, don’t do it just for the money. You might go through some hard times, but in the end if you truly love what you do, it’ll be worth it and it’ll show in your work.

That’s it for this time! Enjoy the great weather, and come back soon for more news about Le Gouffre!