Le Gouffre is the first animated short film produced and directed by Lightning Boy Studio, a young creative team based in Montreal. The film tells the story of two spirited travelers who come across an incredibly wide chasm on their journey and decide to build a bridge to cross it. Released in February 2015, the project had first gained a lot of attention following the huge success of its Kickstarter campaign, which allowed the creators to finance the movie’s post-production. Many were impressed by the passion and determination of the small team of three animators, who spent more than two full years creating the 10-minute film.

As of now, Le Gouffre has been selected in more than 60 festivals around the world and won nine awards, four of them for “Best Animated Short”. For the complete list of selections and awards, please head over to the Awards page.

Below is a short making-of video showing the journey behind the film.

Lightning Boy Studio was born in 2012 out of a shared passion: to tell great stories. The three founders met in animation school in 2009 and have dreamed ever since to be able to work together on projects of their own. Le Gouffre was the result of their first collaboration.

The team is now working on a completely new project, a feature film entitled Shadow of the Dino Kings. More colorful and humorous, the story takes place in a crazy, over-the-top medieval world in which knights must fight for their survival against ferocious dinosaurs.

With the student short film Swing under his belt, Carl has animated on various projects over the past years, including three feature films and numerous commercials and TV series. On top of doing all the rigging and technical supervising, he was the major workforce behind Le Gouffre‘s character animation.

A born storyteller, Thomas entertains a special interest for directing and storyboarding. He also has an undeniable talent for explosive visual effects, as shown in his student films L’Ultimatum Ultime and Maximum Galaxie. He was responsible for most of Le Gouffre‘s storyboards and compositing as well as all the special effects. 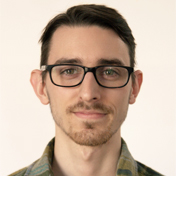 After directing the student film Le Cinquième jour, David worked as an animator for the film and game industry. Since then, he decided to pursue his passion for illustration by founding Mr. Cuddington with his wife. In charge of all the textures and matte paintings, he was also the creative mind behind Le Gouffre‘s unique painterly look.