Hey everyone! Our last update was over a year ago, so we’re way overdue for some news!

We’ve been looking into stats lately and were pretty amazed to see that Le Gouffre has been viewed more than 8 million times if you add up all the different uploads online! It’s been more than five years since the film was released, so it’s great to still see people discovering it for the first time even today.

So what have we been up to since? If you didn’t know yet, we have been working on our next project called Dinomancers (formerly named Shadow of the Dino Kings). We have been hard at work and although we didn’t update much during the last year, we are now finally back on social media with new stuff to share.

Check out this video of Thomas to get the latest update, and make sure to watch the first two tutorials below if you want to learn more about creating an NPR look.

After years of development, we are thrilled to finally share our new animation project with you guys! Introducing Shadow of the Dino Kings! 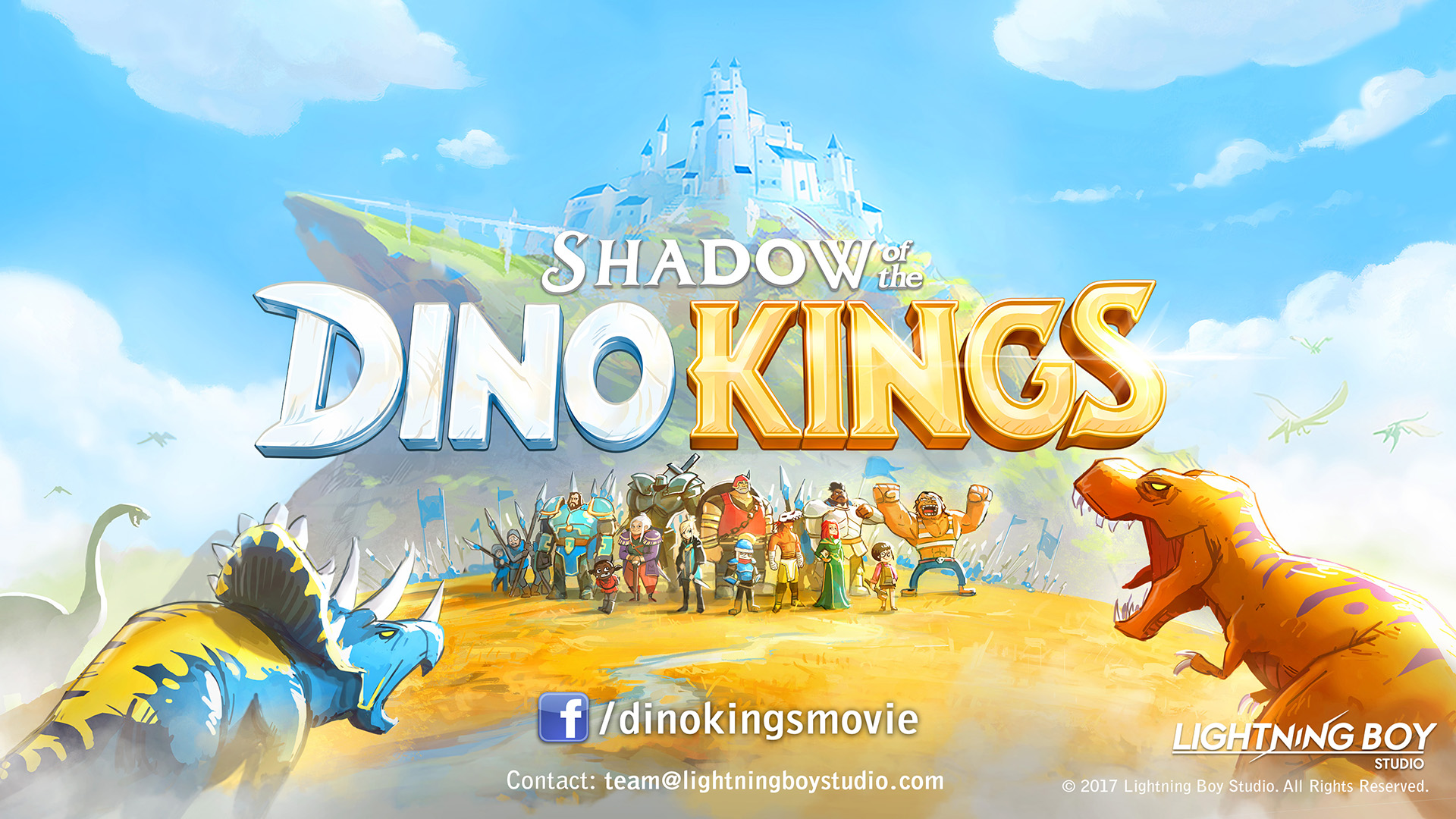 Hi everyone, it’s been a while.

Almost three years have passed since our last update of February 2nd, 2015. It’s about time we give you some updates on what happened during our absence.

Our intention had always been to do a postmortem once Le Gouffre would be completed, and take the time to share our experience making the film. Before we started production, we read similar articles online written by other short film directors, and we found them really useful. So this article will be our way to share our personal experience and hopefully help new teams of artists make their own project a success!

Before getting started however, we have some exciting news! As we turn the page on le Gouffre and share our final thoughts about it, a new adventure is about to begin!

Get ready, because very soon we will reveal our brand new project! Make sure to follow Le Gouffre’s Facebook page to know as soon as it’s posted!

So where to begin?

The three of us were friends before deciding to make Le Gouffre.

We met at Cegep du Vieux Montréal around 2008, where we studied animation. We loved each other’s work and decided to make a film together after graduating. We thought that by combining our strengths, we could make something amazing, and eventually make feature films (our dream back then, and it still is to this day).

Little did we know that this was probably THE most important part of the whole process.

The one factor that will affect 100% of your chances of finishing a project is the team you build. A lot of great projects can come crashing down if the team isn’t devoted enough, or dependable, or communicating well. Be sure of who you decide to work with, because no matter how great your project is, if people give up midway or don’t want to collaborate, nothing will happen.

The three of us were really lucky to meet and decide to work together.

We didn’t start working on the film right away. We waited for the time to be right. Saved up money, working in the industry. We wanted all three of us to be available and focused on the project. And during that time, we were brainstorming ideas.

Our first idea would have been a much shorter film featuring a young kid so fast he could race with lightning bolts. It was meant to be visually impressive, much less realistic than Le Gouffre.

Things were progressing well, but after developing the project a bit, we began to feel the story was too simple. We figured that if we were to spend lots of time working on a short, we should be proud of every aspect of it, including the story.

So we went back to the beginning and developed a story with themes we loved. Friendship and the courage to follow one’s dream would be at the core of our film.
We basically came up with the ending first. Identifying the emotions we wanted to give to the audience, and then we created the rest of the film to build up to that moment.

Finally, we were all set!
And as we began production, we came up with a different approach to taking decisions among our team.

EVERYONE MUST BE ON BOARD WITH EACH DECISION

Usually on a project like this, there would be one director, one art director, one animation director, and so forth. In case of arguments within the team, there would usually be some sort of voting system. If two out of three agree to change something, majority wins and we change it.

We didn’t work that way. The three of us would have equal power when it comes to any decision.

More than that, every decision we took had to be approved by the three of us. Meaning that if two of the three agreed to change something, but the third one disagreed, we would keep talking about it until we found a solution that pleased everyone.

The reasoning behind this is simple. We wanted to work on this together as a team, we each value each other’s artistic opinion. If one of us doesn’t like something, there’s got to be a reason. We didn’t want to force each other to accept decisions that way.

Of course, this way of doing things was hard. Having one leader that can say “no, I’m the boss, you obey” at any time would have made things go faster.

There were lots of instances where the three of us would argue for hours about certain decisions. Sometimes, we wouldn’t find a solution right away and we’d go home to think about it some more. But like all things, when you take the extra time to do it right, it usually pays off. After sleeping on it, one of us would usually come the next day with a new take on the problem. Something that the three of us liked even more than the original solution.

We are aware this way of making a project wouldn’t fit with any project or any team. That’s what worked for us, a very small team that was willing to take longer to do a project to make it as good as possible. It also wouldn’t have worked if we didn’t have complete faith in each other’s work.

THE PRODUCTION – MONEY AND TIME SINK

The rest of the production was pretty standard.

Countless hours. Hard work. No money, so we had to live on the cheap.

We moved in together and put our computers in our living room. That way, our apartment and “studio” would be the same, only one rent to pay.

We invested countless hours, working more than 40 hours a week for more than two years. We had to stay focused and keep working. To help us go through production, we made sure to have fun and play board games every Wednesday night. It might sound silly, but we wanted to still hang out as friends, not only co-workers, at least once a week.

At some point, the lack of money became a real issue.

We were hoping to get a grant to help us finance the film, but we were rejected the three times we applied. We needed money to pay for the music and sound effects of the film, so we decided to do a Kickstarter campaign.

Film (live action, animated, long or short) usually do really badly on Kickstarter, unlike other projects that have physical products they can sell. We knew we wouldn’t make tons of money with our campaign, but we just needed a few thousands. Doing our production blog and sharing our project on animation forums over the years helped us a lot. We had around 300 followers on Facebook before starting our Kickstarter campaign, and even though it’s not that much, it was enough to spread our video and reach lots of people around the world.

The good thing about doing a Kickstarter campaign is that it’s a good way to give visibility to your project. Once the campaign was over, not only did we collect $25,000, but we also ended up with 600 followers, double than what we had before.

Once our film was completed, we decided to send it to festivals for a year before releasing the film online.

There were two bad sides to this approach.

First, festivals are expensive. You’ll have to pay to submit your film, and sometimes have to pay extra to ship your film physically. Secondly, it meant we would have to wait a year before our film would be available online, and let’s face it, that’s where any film gets the most exposure.

The good side though, was that our gamble paid off and our film got many awards, which then gave a bit more weight and exposure to the online launch.

All in all, we don’t regret giving our film a festival run, but it’s really once we put the film online that we got the best response. We were contacted by producers and agents wanting to work with us, which gave us a big motivational boost.

After Le Gouffre was online, we needed to find a job real quick, which we did.

The three of us each went our way for a little while. We did have an idea for another project, but it wasn’t ready yet, and we were burned out.

If we had something ready as we finished our film, it would have been great, since that was when studio producers were contacting us. So to people out there working on your project, be sure to have your next one ready sooner than us!

In our case though, that break was all right. We even took the time to each start our own separate projects.

David created Mr. Cuddington, a company that creates illustrations for board games: www.mrcuddington.com

And Thomas created Super Starcore Ultra, a sci-fi universe that will be explored through video games and short films: Www.facebook.com/superstarcoreultra

And so, now that time has passed and we are energized once again, we are back at work on this film idea we had years ago.

We’ve been working on it on and off over the last three years, but now things are moving at a good pace, and we are really excited to share more details with you.

So please, stay tuned, and thank you all for following our progress throughout Le Gouffre’s journey. Hopefully, you’ll all be excited to jump on board with us for the next adventure!